In compliance with EU internet privacy laws, exiting this message attests that you, the user, consent to the use of cookies on this website. We use cookies to provide you with a better experience. By continuing to browse the site you are agreeing to our use of cookies in accordance with our Cookie Policy.
Home » Online employment application allows truck fleets to go paperless MyCDLapp.com recently rolled out a version of its online employment application software.[/caption]

The employment software provider MyCDLapp.com, recently launched a version of its online employment application software allowing carriers to recreate their current paper forms in an online version, promising to be a true timesaver.

The form tool differs from traditional online document signature tools because of its design flexibility. Rather than simply applying fillable fields an existing form that the user uploads, MyCDLapp.com is specifically designed to generate a mobile-ready version of the user's form. While the form builder boasts a simple user interface that requires no design experience, the company offers free design services to help carriers go digital fast.

"The majority of our carriers start out converting 2-3 of their existing forms to an online version. Once they experience the significant reduction in turnaround times for completed forms, they immediately start converting additional forms," says Brandon Lawrence, Customer Service Manager at MyCDLapp.com. "As a result, most of our carriers are now starting to expand use of our tool beyond just application-related forms."

The company reports that a typical one-page form can go from paper to digital in roughly 15-20 minutes. Delivery of the forms to drivers can be automated, triggered by the completion of the job application, or users can choose to send forms manually as specific milestones are reached. Drivers are able to complete the online forms in far less time than paper forms because of the modified design of each form, and because much of the information is prepopulated from the original employment application. The system also includes a library of public forms that are commonly used by truck fleets. Forms such as the "Violation & Review Record," an annual review form mandated by the Department of Transportation, can be sent by the carrier to a driver's device and returned within minutes 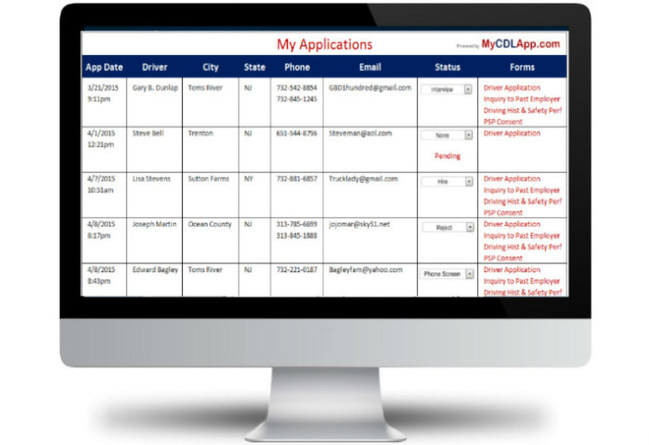 "In addition to offering carriers an online job application we can now help them further reduce administrative times by eliminating the need to send and receive paper and PDF documents," says Lawrence. "The response from our carriers has been overwhelming; with most users focusing on the improved turnaround times, as well as the professional look of the mobile forms and the ease of conversion."

The use of cloud-based processes like the one MyCDlapp.com offers are expected to surge in the coming years as truck fleets look for more ways to streamline operations. At under a hundred dollars per month, MyCDLapp.com makes it affordable for carriers of all sizes to digitize the flow of critical forms without a significant investment technology.