In compliance with EU internet privacy laws, exiting this message attests that you, the user, consent to the use of cookies on this website. We use cookies to provide you with a better experience. By continuing to browse the site you are agreeing to our use of cookies in accordance with our Cookie Policy.
Home » OYO pumps up its international leadership for expansion

OYO pumps up its international leadership for expansion

China, Malaysia, Europe, and UK to get country heads

Indian hotel chain giant, OYO Hotels & Homes, has announced a number of new leadership appointments across three of its fastest growing international markets. With the recent investment from SoftBank, the hospitality chain wants to aggressively expand its presence across these markets.

The company is bringing on board Sam Shi as its chief operating officer (COO) for OYO Jiudian, its Chinese subsidiary, which over the last 12 months has emerged as its second home market after India.

Prior to joining OYO, Shi served as president of Global Consumables and chief executive at Asia Pulp & Paper Co. He also has had stints with energy drink giant Red Bull and French multinational hospitality firm Accor Group, aside of having a two decade-long tenure across roles at Pepsi China, the domestic subsidiary of the US multinational PepsiCo.

Shi will report to Ritesh Agarwal, founder & CEO at OYO, who is overseeing the China market directly. 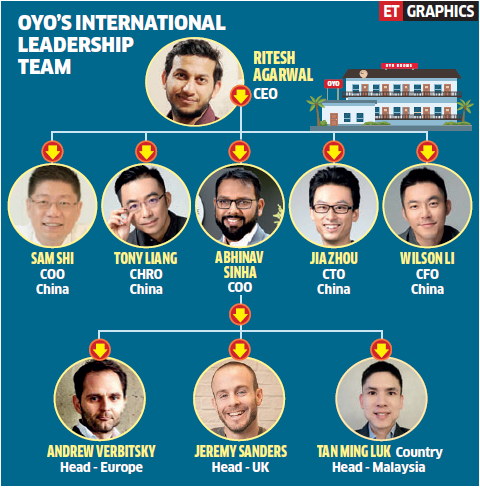 OYO has also appointed Andrew Verbitsky as head of Europe, Jeremy Sanders as the UK head and Tan Ming Luk as the country head for Malaysia. All of them will report to Abhinav Sinha, OYO’s COO. Verbitsky has had stints at Airbnb and Delhivery Hero, among others.